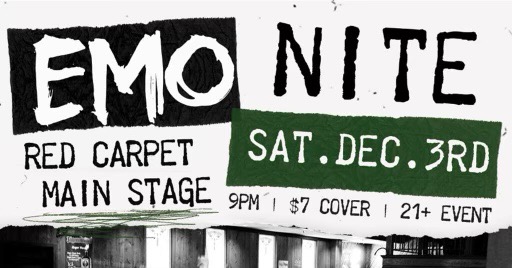 Cut To The Feeling Presents: EMO NITE
We’re back and bringing you the night of all nights to party to all of our favorite alternative and punk rock songs of the 90s and 2000s. We’ll have projections of the saddest music videos along with all the right Emo vibes so pull out your black eyeliner, checkered vans, and tattoo chokers to come join us in the Black Parade.
Doors open at 9pm
$7 cover
**DRESS UP**
We’ll have prize giveaways to hand out to:
– Saddest Emo Kid
– Best hair
– Best makeup
– Tightest pants
– Best band t shirt
**MYSPACE PHOTO BOOTH**
Including a photographer to capture your peace signs and duck lips. Just don’t forget to #emonite #redcarpet #cuttothefeeling if you take that perfectly angled selfie instead.
**FEATURED COCKTAILS**
– Black parade
– The tumblr
– I can get sexual too
– Misery Business
– The Mr. Brightside
– Rawr XD